The purpose of this Association shall be to collect, preserve and interpret the Cultural and Agricultural History of the Central Washington area and to have the freedom and the right to engage in other activities as allowed by the laws of the State of Washington. 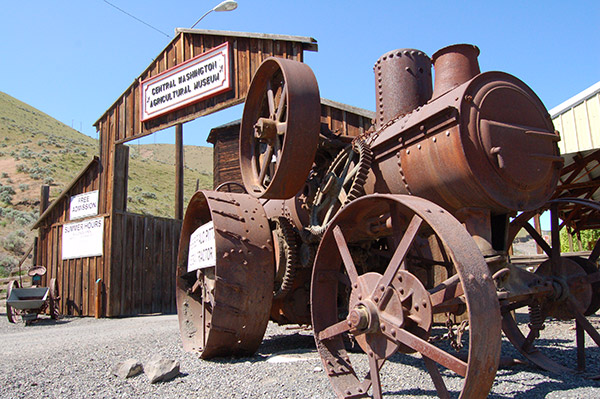 In November 1978, the late Ted Falk shared his dream of preserving the agricultural heritage of the Yakima Valley and Central Washington and introduced the idea of a farm equipment museum to a small group of interested people. The dream became a reality the following year when the Central Washington Agricultural Museum was founded on March 15th, 1979, as a non-profit, tax-exempt 501(c)(3) organization governed by a Board of Directors with a volunteer staff. The volunteer workforce was made up of knowledgeable people who worked with and restored the equipment on display as well as creating active demonstrations of how the equipment was used.The Museum had its first Membership Drive the fall of 2010. That same year they hired their first paid part-time Administrator with funds from a grant from the City of Union Gap. The dream continues but the focus has changed slightly as many of the members/volunteers are getting older. With great anticipation the new members/volunteers are stepping up to learn these new skills and will keep our Central Washington Agricultural History and Heritage going strong for generations to come. Since the formation of the Central Washington Agricultural Museum, the city council of Union Gap, Washington generously leased 15 acres in Fullbright Park, which is south of the city. Here the museum is constructing semi-open buildings to house displays and exhibits of numerous items donated by farm families in the Yakima Valley and Central Washington.

The display buildings, made possible through donations from families and trust funds, form an outer ring surrounding a working windmill. Rows of vintage machinery are displayed on circling terraces between the windmill and the rings of buildings.This site was a former farm on the south outskirts of the original "Yakima City" incorporated in 1883 and now Union Gap. Union Gap, one of two towns in the State of Washington still operating under territorial charter of the "Washington Territory" is a fitting location for the Museum.

Nature trails through the sagebrush hillside and along Ahtanum Creek offer an interesting walk through identified plants. The Pioneer Power Show is held on the third weekend of August. The past comes alive with restored farm equipment and implements of generations past including an old time threshing bee.

Check out Our Location and Hours
Top